It isn’t unusual for conspiracy theorists to start coming out of the woodwork once a crisis arises – it’s only human to search for a reason for all the upheaval caused by a global calamity like the coronavirus outbreak.

One conspiracy theory that has proven especially prevalent of late links the latest generation of mobile technology, 5G, to the virus, with claims that the Covid-19 crisis is just a smokescreen to explain the health issues caused by 5G.

In order to not aid the spread of fake news, we won’t be going into any kind of detail in terms of the claims that conspiracy theorists are making, but will rather look at the facts.

5G is currently being launched across the globe, and this latest generation of mobile internet connectivity follows 4G (LTE) and 3G. 5G promises greater speed (comparable to fibre connections) and low latency to facilitate machine-to-machine connectivity and the Internet of Things, among other benefits.

While 5G, just like its predecessors, utilises parts of the electromagnetic spectrum in order to transmit radio signals, the radio frequency bands used by 5G are mostly on the low and mid-band spectrums (making use of frequencies between 0 and 6 gigahertz). Some countries have opted to use the high-band spectrum for their 5G networks, but this isn’t ideal, as this part of the spectrum provides weak coverage over short distances, with a poor ability to penetrate objects. As such, most 5G networks in the world make use of frequencies between 3.4 and 3.8 gigahertz, according to research done by Africa Check.

Many conspiracy theorists base their claims surrounding the dangers of 5G on the World Health Organisation’s classification of all radiofrequency radiation as “possibly carcinogenic to humans”. However, the WHO’s commission on non-ionising radiation protection has also said that this classification doesn’t amount to a measure of risk (leaf extracts of the aloe vera plant are also on this list), and that “no effects of radiofrequency [electromagnetic fields] on the induction or development of cancer have been substantiated”.

Some types of electromagnetic radiation do pose dangers to the human body – gamma rays, x-rays and ultraviolet radiation, for example, can all cause cancer – but these are typically higher on the electromagnetic spectrum.

Non-ionising or low-frequency radiation, on the other hand, does not cause cancer, and in the case of telecommunication frequencies, an extensive set of guidelines governs the level of radiation that the public and specialised workers may be exposed to. In fact, according to Leon du Toit, deputy director of non-ionising radiation and medical devices at the South African Health Products Regulatory Authority, radiation exposure levels around cellular communication equipment are usually much lower than safety guideline limits.

In short, there is no scientific evidence that 5G causes any damage to the human body, and there is certainly no link between 5G technology and the outbreak of the novel coronavirus.

Earlier in May, Vodacom launched the first live 5G mobile network in Africa in Johannesburg, Pretoria and Cape Town, after the network provider was assigned temporary spectrum (in the 3.5 GHz band, in case you were wondering) by ICASA for the duration of the national state of disaster brought about by the Covid-19 outbreak. This gives Vodacom the chance to cater for a 250% increase in fixed mobile traffic in the midst of the national lockdown. Click here to see if your suburb has 5G coverage. 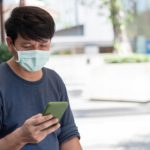